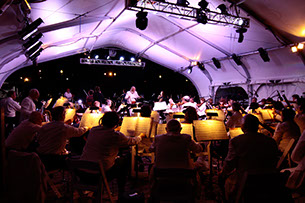 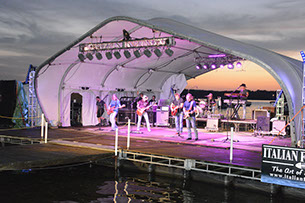 The Early Days of the Pops ……

The Chautauqua Lake Pops is a series of outdoor concert events of historic proportions, featuring world-class musicians from the Chautauqua Region as well as national acts featured on our Floating Stage on the splendid Chautauqua Lake. Every weekend all summer long we provide a variety of entertainment such as music concerts including classical, swing, jazz, Country and modern.  During the weekdays throughout the summer we have events like the Lake Night at the Movies, hilarious comedy troupes, and so much more!

In 1998, the inaugural year of the event, they had great success as they attracted an estimated 4,000 people who gathered for the concert on the lawns, decks and water of Chautauqua Lake. The Pops performed a wonderfully diverse program featuring works from Gershwin, Strauss, Sousa and The Beatles.

In 2003, the summer concert season was expanded and instead of just one major concert which took place on Labor Day, the Pops summer concert series extended to concert performances Saturdays and Sundays with the new addition of the Floating Stage concert venue.

Read more about The Floating Stage>>>

Over the last 20 years, the Chautauqua Lake Pops,  evolved to World Class proportions to include world class acts of all kinds and attracting a wide variety of audiences.  Since 2019, this exciting program has taken place on the shores of Mayville, New York!

There’s something for everyone – Lake Night at The Movies,  Nationally acclaimed concerts featuring only the best musical entertainment in the country and so much more!

BECOME A SPONSOR OF THE CHAUTAUQUA LAKE POPS TODAY!

If you can help support our efforts to “Bring the Arts to the People,”  please send your contribution to:

(contributions are tax-deductible to the extent allowed by the law)

We need your help to keep bringing this gift to our community. Please consider a contribution to keep the arts alive and on the water this summer on beautiful Chautauqua Lake!

If you would like more information on becoming a corporate sponsor or sponsoring a performance please contact: